Home
Back to top

The Other Windsor Girl: A Novel of Princess Margaret, Royal Rebel (Paperback) 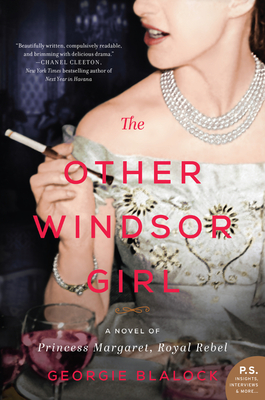 By Georgie Blalock
$16.99
Email or call for price

Named One of the Best Books of the Week by the New York Post!

In a historical debut evoking the style of The Crown, the daughter of an impoverished noble is swept into the fame and notoriety of the royal family and Princess Margaret's fast-living friends when she is appointed as Margaret's second Lady-in-Waiting.

Diana, Catherine, Meghan…glamorous Princess Margaret outdid them all. Springing into post-World War II society, and quite naughty and haughty, she lived in a whirlwind of fame and notoriety. Georgie Blalock captures the fascinating, fast-living princess and her “set” as seen through the eyes of one of her ladies-in-waiting.

In dreary, post-war Britain, Princess Margaret captivates everyone with her cutting edge fashion sense and biting quips. The royal socialite, cigarette holder in one hand, cocktail in the other, sparkles in the company of her glittering entourage of wealthy young aristocrats known as the Margaret Set, but her outrageous lifestyle conflicts with her place as Queen Elizabeth’s younger sister. Can she be a dutiful princess while still dazzling the world on her own terms?

Post-war Britain isn’t glamorous for The Honorable Vera Strathmore. While writing scandalous novels, she dreams of living and working in New York, and regaining the happiness she enjoyed before her fiancé was killed in the war. A chance meeting with the Princess changes her life forever. Vera amuses the princess, and what—or who—Margaret wants, Margaret gets. Soon, Vera gains Margaret’s confidence and the privileged position of second lady-in-waiting to the Princess. Thrust into the center of Margaret’s social and royal life, Vera watches the princess’s love affair with dashing Captain Peter Townsend unfurl.

But while Margaret, as a member of the Royal Family, is not free to act on her desires, Vera soon wants the freedom to pursue her own dreams. As time and Princess Margaret’s scandalous behavior progress, both women will be forced to choose between status, duty, and love…

Georgie Blalock is an amateur historian and movie buff who loves combining her different passions through historical fiction, and a healthy dose of period piece films. When not writing, she can be found prowling the non-fiction history section of the library or the British film listings on Netflix. Georgie writes historical romance under the name Georgie Lee. Please visit www.georigeblalock.com for more info about Georgie and her writing.

“A fascinating portrayal of Princess Margaret and the many scandals that surround her...Full of glamour, intrigue, and with delicious glimpses of the wider royal family, The Other Windsor Girl is a delight. Perfect for fans of The Crown.”
— Hazel Gaynor, New York Times bestselling author of The Lighthouse Keeper’s Daughter


“In The Other Windsor Girl, Georgie Blalock immerses the reader in the delightfully intimate and scandalous royal circle of Princess Margaret and her set. Beautifully written, compulsively readable, and brimming with delicious drama, Blalock’s novel illuminates the private side of the British royal family.”
— Chanel Cleeton, New York Times bestselling author of Next Year in Havana

“The Other Windsor Girl is a compelling novel about the late Princess Margaret...Fans of The Crown will lap this up!”
— Gill Paul, bestselling author of The Secret Wife

“The Other Windsor Girl is a unique look at the outrageously mercurial Princess Margret and her inner circle, as seen through the eyes of her lady-in-waiting, the Honorable Vera Strathmore...Fans of The Crown and all things royal will devour this richly researched novel.”
— Renée Rosen, author of Park Avenue Summer

“An effervescent cocktail of a read, The Other Windsor Girl gives readers a scintillating glimpse into the fast life of the British post-war aristocracy as well as a peek behind the scenes when certain royals were behaving less than royally. A must-read for fans of The Crown!”
— Stephanie Thornton, author of American Princess

“The Other Windsor Girl is royally romantic, glamorous, and sexy...A must-read for royal-watchers and fans of The Crown."
— Kerri Maher, author of The Kennedy Debutante

“A well-written novel… a portrait of a remarkable, if fictional, friendship.”
— Historical Novel Society

“…A wonderfully written combination of two seemingly different characters who bond over their similarities. A great read about a “lesser known” royal from a perspective we don’t normally see.”
— Girly Book Club

“…A fascinating glimpse into Princess Margaret's life and is perfect for fans of The Crown.”
— Confessions of a Book Addict

“(An) up-close view of the equally beloved and reviled Princess Margaret.”
— Booklist